Over a couple of beers in the local pub last night, Mrs Motorcardiaries and I were discussing what pushes our emotional buttons. In spite of our many years together, Mrs S still can’t understand how or why motor racing manages to elicit in me such strong emotions. From the ecstasy of witnessing a truly great drive to the horror of a serious crash, the depth of my feelings for the sport brings out extreme emotions.

The catalyst for this conversation was the appearance of Billy Monger as Lewis Hamilton’s guest at the British GP. Like so many in the racing community, I found the violence of Billy’s Formula 4 accident hugely distressing but the knowledge that this charming young man had lost his legs – and at just 17 – shook me. My adoration for the racing is such that its dark side hits twice as hard. How dare this wonderful sport so cruelly kill and maim its protagonists? It’s the ultimate paradox and one with which I regularly wrestle.

Since his return to public life – if one might call it that – Billy Monger has shown such inspirational courage, dignity and optimism. I was welling up watching him interviewed by Louise Goodman but out of sheer pride and admiration rather than sadness. In spite of the most horrifying injuries, he is continuing his racing career and simply absorbing the setbacks along the way. What a remarkable story. And the beautiful tweet from his best friend, both lads asleep in the hospital, Billy resting with a blanket on him, body abruptly truncated at the knees, with Jamie Caroline dozing at the end of the bed, was hugely touching. It’s pretty clear that Billy Whizz was going to be exceptional with or without his legs – and his story will probably always bring a tear to my eye. 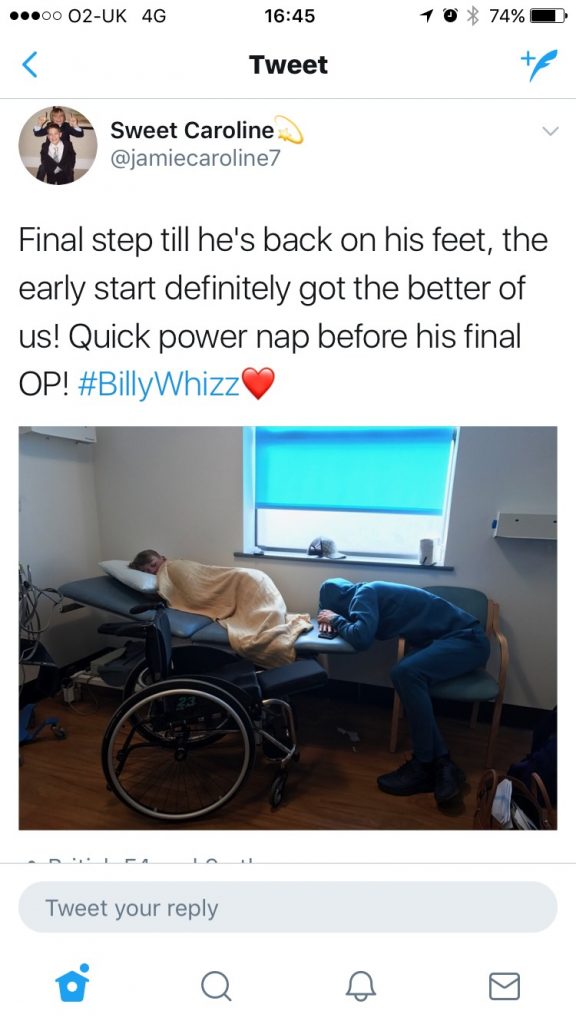 It doesn’t seem so difficult to rationalise why the story of Billy Monger might prick the corners of my eyes – here is a tale of human endeavour in the face of adversity; a resilience beyond one’s own comprehension. Why, then, did I find myself openly weeping in the paddock at Indianapolis in May – and again at Goodwood in June? Why did a couple of racing cars cause me to totally lose composure?

I was weaned on club racing events at Oulton Park from childhood. As I grew older, we would venture further afield – to Donington Park, Silverstone and Goodwood. And yet the foreign tracks I read about in books seemed so exotic and so obscure as to be out of reach to a normal chap like me. I couldn’t have dreamed that one day I’d see sports prototypes at Le Mans, grand prix weapons at Monza or hulking GT cars barrelling around the Nordschleife. After all, how could I? I’d never even met anyone who’d been to Le Mans, let alone Bathurst or Indianapolis.

And so these places where my heroes waged war took on a mythical status; with each passing year, new chapters were written into the history books. Over the last ten years, I’ve made it my life’s work to attend and document each of the world’s great motor sporting events; to get under their skin, to explore their secrets and share the tales so perhaps others might realise that they, too, can experience the same.

As I slowly tick these events off my list, the strength of feeling for each event seems to increase rather than diminish. It never stops being special and I live for that buzz of arriving at a new track – the new colours, sounds and smells. I love the incredulity of seeing cars and motorcycles in the flesh which have hitherto existed only in two dimensions and to see new heroes on new battlegrounds. You’re watching motor racing history at 200mph.

The Indianapolis 500 had been top of my hit list for several years: The biggest, fastest, scariest race in the world. The most storied circuit and event in North America – perhaps the world – and all thousands of miles away from my own Euro-centric experiences. I remain utterly fascinated by the heroism of racers who strap themselves into tiny cockpits, knowing they will barely dip below 220mph for three and a half hours. Any accident at the Brickyard could be their last.

I managed to keep myself relatively composed for a couple of hours but the Speedway does something funny to you. It’s a vast place and steeped in tradition – you never forget where you are or who went before you. Walking through the open paddock, Simon Pagenaud’s vivid yellow Dallara is pushed on its dollies towards me. It’s a totally innocuous activity but the enormity of the experience overwhelms my limbic system. Here I am, just a lad from Cheshire who loves racing, and I’m watching a Penske IndyCar skim my knees at Indianapolis. Tears run down my face; how did I get this lucky? And how incredible is this place? 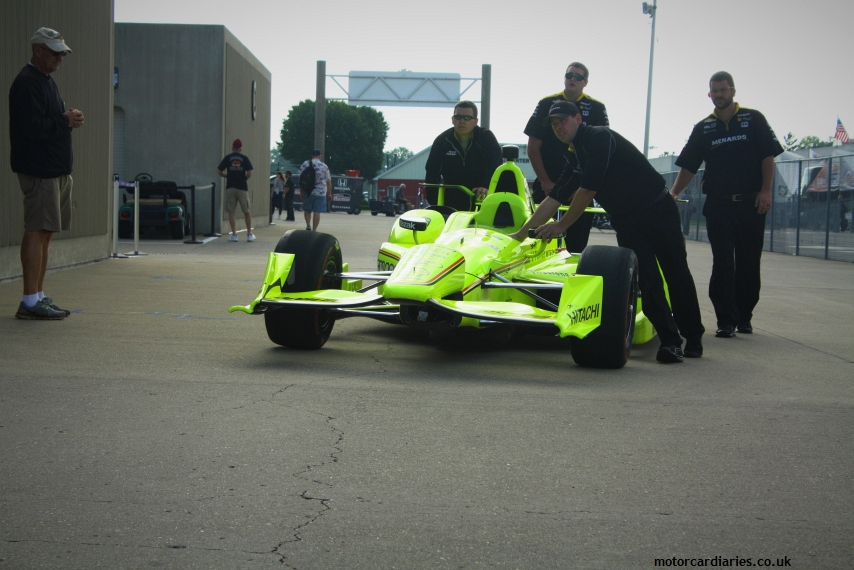 As Mrs S and I talk about this moment in the pub, she notices that my eyes are watering again, just recalling it. I can’t find any rational explanation. She was stood next to me in the Indy paddock and the moment passed without so much as an eyelid batted.

A month later, we find ourselves cruising the Goodwood Festival of Speed paddocks when we stumble upon Laurence Stroll’s brace of special Ferraris: 330 P4 0856 and 512M 1040. This is my 24th Festival of Speed so I can hardly blame to freshness of the experience on my emotional outpouring but the presence of these two cars once more leaves me wiping away the tears. 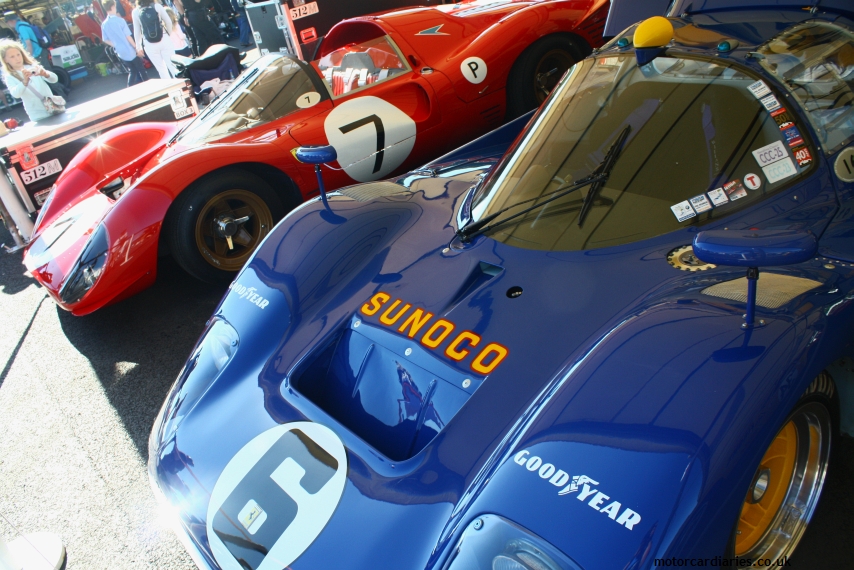 That unique and magnificent 512M is being warmed up, its V12 growling and spitting before it clears its throat as the revs rise before settling back into a lumpy, malevolent idle. In 1971, this was the fastest Group 5 sports racing car in the world. It should’ve taken all scalps in the big events but bad luck left it with a solitary third overall at Daytona, its gorgeous bodywork a duct taped mess.

Today it’s as beautifully prepared as Donohue and Penske intended. The blue paintwork pops and you can see the brushstrokes in the Sunoco branding on the rear wing. This most glorious of all Ferraris – a dismal failure but the lone car to truly take the fight to the 917s during 1971 – was driven only by Hobbs and Donohue, and it feels like it’s being run solely for my pleasure. I’m lost in the moment – it’s just magic. 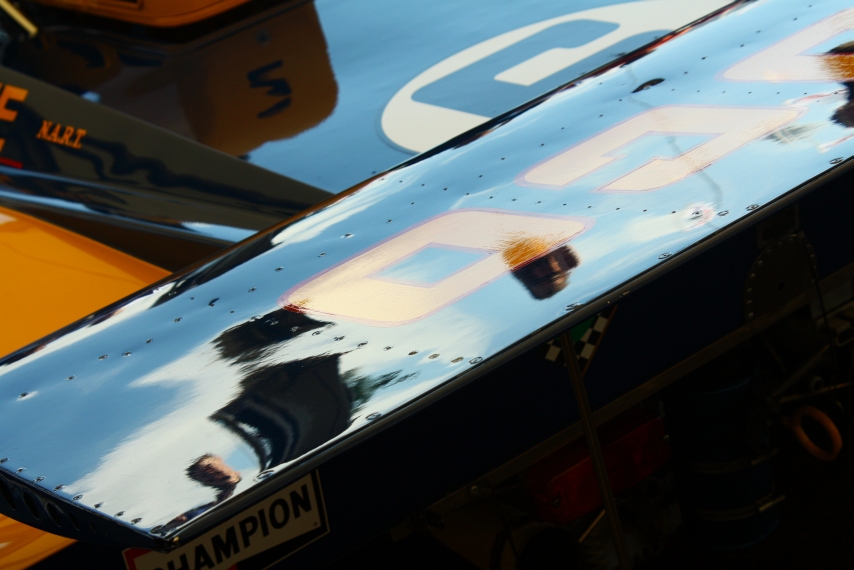 For the second time in a month my bottom lip is quivering and my eyes are streaming. I can’t adequately explain it but these special cars, driven by incredible people on the world’s most challenging circuits connect with something innate; something buried deep in my soul and the fabric of my being. Just occasionally, the enormity of a moment is too much. I guess I’m fortunate to have found a hobby which offers such pure joy – even if the source of that joy is the eternal struggle to tread a path on the sport’s light side and not its dark side.